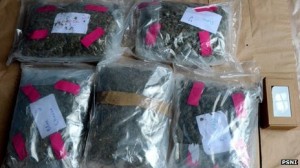 Class A and Class B drugs seized by police

A MAN is due in court on Monday morning charged with possessing class A and class B drugs.

The 41-year-old was arrested during a police operation in Derry on Friday evening.

He will appear at a remand hearing in Derry Magistrates’ Court.

Police chiefs say a substantial quantity of suspected cocaine and suspected cannabis was recovered by officers.

A 17-year-old man arrested at the same time has been released on police bail.

“The potential harm to the public caused by drugs is an issue that the PSNI take seriously,” he said.

“We will continue to work in conjunction with our colleagues from organised crime branch and partner agencies to ensure we bring to justice those involved in dealing in drugs at all levels.”