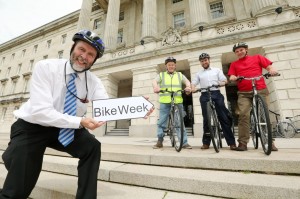 TRANSPORT Minister Danny Kennedy has asked fellow MLAs to give their support to Bike Week and join in a cycle ride from Stormont to Belfast City Centre.

The call to support Bike Week, which runs from Saturday 14 to Sunday 22 June did not go unanswered and a willing group of MLA cyclists set off from Stormont Estate and cycled into Belfast city centre.

Bike Week highlights the numerous health, financial and environmental benefits associated with cycling and is celebrated as part of National Bike Week which takes place across the UK and Ireland.

“The first MLA Cycle Ride, which replaces the usual MLA cycle race, is a welcome fixture on the Bike Week calendar and I am delighted that MLAs have committed a little bit of time today to support this year’s launch.

“Bike Week offers an opportunity for cyclists of all abilities to get involved in a wide range of cycle events. With over 1,300 kilometres of National Cycle Network cycle lanes and paths in Northern Ireland, cycling is now being enjoyed by an ever growing number of people.

“Whether it is a family bike ride, a journey to work or school, or simply an opportunity to get some exercise, Bike Week offers an excellent opportunity to get on your bike and incorporate a sustainable and environmentally friendly mode of transport into your day.”

As part of Bike Week this year in Northern Ireland key events include Bike to School Day on Wednesday 18 June, Bike to Work Day on Friday 20 June and the opening of cycle parking facilities at Cairnshill Park and Ride on Monday 16 June.