ROBINSON AND MCGUINNESS WELCOMEE GAME OF THRONES EXHIBITION TO BELFAST 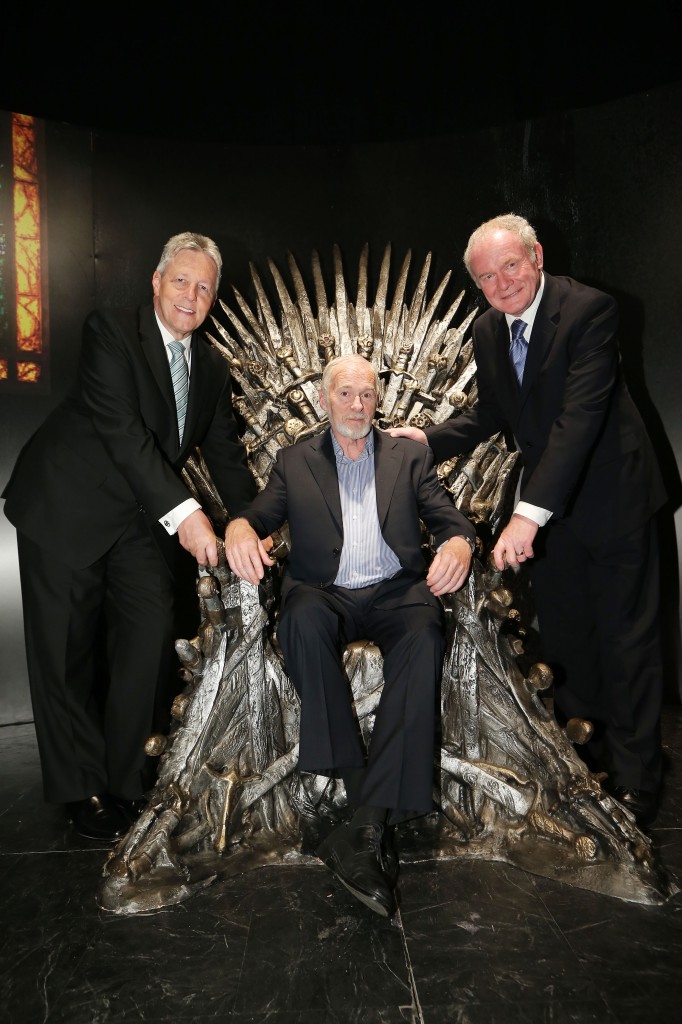 FIRST Minister Peter Robinson and the deputy First Minister Martin McGuinness tonight welcomed the arrival of the Game of Thrones Exhibition to the Waterfront Hall, Belfast.

“In 2013 the exhibition attracted more than 18,000 visitors to Northern Ireland from all over the world over 10 days and I am confident that it will easily exceed that number this time. Quite simply Game of Thrones is an amazing show made in spectacular locations across Northern Ireland.

“Its incredible success, its vast size and scale, coupled with Northern Ireland’s expertise and input to the series, is sending out a very strong message about our capabilities in the film and TV industries. Not only does it further cement Northern Ireland’s commitment to our expanding creative industries sector, it also reinforces our reputation as a world-class location for film and TV production, bringing £80million to our economy in terms of direct spend and job creation.

“I commend all those involved in the production of Game of Thrones which is broadcast in more than 70 countries across the globe and is one HBO’s most successful shows ever made.”

When the First Minister and deputy First Minister were in the US on a trade mission in March they travelled to the west coast to meet Jay Roewe, Senior VP Production HBO and other senior HBO executives to reinforce their continued commitment to work closely with HBO.

The deputy First Minister Martin McGuinness said: “Game of Thrones has been a major success story for the north of Ireland. I am delighted to see the red carpet rolled out for this exhibition launch bringing some of the Game of Thrones magic to the Waterfront and to the city of Belfast.

“Demand to see the Game of Thrones Exhibition has again been exceptional; 11,000 tickets were snapped up in just two hours. I have no doubt it will be a resounding success like the series itself.

“To date the show has contributed in the region of £80 million to the local economy and I am pleased the economic benefit will continue through Series 5, which HBO committed to earlier this year.

“Films and television programmes have a significant, positive effect directly on the creative industry and also on tourism. Continued investment by major production companies like HBO ensures our creative industries, which have grown substantially around this show’s massive success, will continue to lead the way on the world stage.”

The exhibition will feature original costumes and props from the series. Interactive elements such as offering visitors a chance to experience the seat of power, the Iron Throne, will have huge appeal to the vast number of Game of Thrones fans throughout the world.

The Northern Ireland Tourist Board in partnership with Northern Ireland Screen and HBO, supported by Belfast City Council is hosting the Game of Thrones Exhibition, which will be on display in the Waterfront Hall from 11-15 June 2014