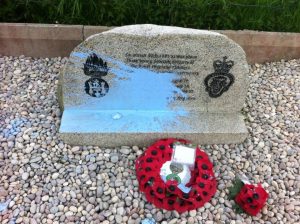 NORTH Belfast DUP MLA William Humphrey has condemned a paint bomb attack on the White Brae memorial at Ligoniel for the three Scottish soldiers murdered by IRA in 1971.

This was the tenth attack on the memorial within the last few years.

The soldiers were lured to their deaths by IRA honetrappers after spending a night out in Belfast.

As they alighted from a car to go to the toilet at the side of the road, IRA gunmen shot them dead.

William Humphrey said: “It is sickening that this simple memorial to three young soldiers murdered in the most cowardly of manners has been attacked once again.

“This is a place for solemn remembrance and it is disgraceful that some people make it their business to repeatedly desecrate it.

“Without doubt these sectarian attacks are being carried out by Republicans who cannot even tolerate the remembrance of the victims of IRA cold-blooded murder.

“It is a terrible indictment on those responsible that they can harbour such hatred and can act so disrespectfully.

“They should know that however often they attack this memorial on this quiet country lane it will be restored and this terrible and shameful loss of life will never be forgotten,” he added.