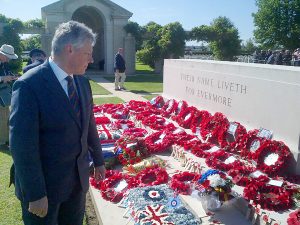 First Minister Peter Robinson has attended the 70th D-Day commemorations in Normandy. He is pictured following a service at Bayeux Cemetry. PIC: PRESSEYE

The 70th D-Day anniversary, organised by the Royal British Legion and the Normandy Veterans’ Association, attended by 500 British veterans, was one of the largest commemorations for the UK and Commonwealth.

Speaking at the commemorations the First Minister Peter Robinson said: “I am deeply honoured to be here today to pay tribute to the fallen and surviving veterans at these very poignant ceremonies to mark the 70th anniversary of the D-Day landings in Normandy on 6 June 1944.

“We must never forget the bravery, courage and sacrifice of those thousands of soldiers who fought and for the many who ultimately gave their lives for all of us. It is right that those veterans are central to today’s commemorations.

“Northern Ireland provided a staging platform for allied forces prior to the D-Day landings.

“We are all eternally grateful to the men and women of Northern Ireland who played their part in one of the most significant engagements in military history.”

The First Minister attended D-Day services at Bayeux Cathedral, Bayeux Cemetery and an international ceremony at Sword Beach, attended by Heads of State from across the UK and Commonwealth The Queen and the Duke of Edinburgh. US President Barak Obama and Russian President Vladimir Putin were also present at the commemorations.


One Response to ROBINSON ATTENDS 70TH D-DAY COMMEMORATIONS IN NORMANDY