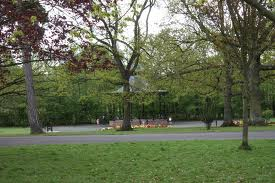 DETECTIVES are appealing for witnesses to a street robbery and assault in Ormeau Park in south Belfast at the weekend.

At around 9.25pm on Saturday evening two males aged 15 and 16 were walking through the park when they were approached by two older teenagers.

One of the older males struck the 15 year old on the head with a plastic bottle making a racist remark before taking a mobile phone from the 16 year old.

The first male involved in this incident is described as around 18 years old with dark hair.

He was wearing a dark coloured t-shirt and three quarter length blue jeans.

The second male is also described as around 18 years old with dark hair. He was wearing a Manchester United football top and grey shorts.

This male is understood to have had a scar on the right hand side of his face.

Police in south Belfast are treating the incident as a hate crime and would like to hear from anyone with information that could assist the investigation.

The non-emergency number to call is 101.