ONE WEEK AFTER HIS MUSLIM GO TO SHOP COMMENTS, ROBINSON SAYS: I APOLOGISE 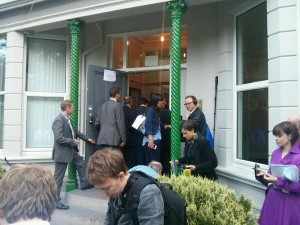 A WEEK is a long time in politics, Harold Wilson once said.

But seven days after he offended Muslims for saying he “would trust them to go to the shops” and then lept to the defence of Pastor James McConnell over his comments, First Minister Peter Robinson has made a public apology to followers of Islam.

The DUP leader was speaking after he privately met Muslim community leaders in Belfast in an effort to put to bed the row.

It comes after he defended comments made by the pastor who called Islam “heathen” and “satanic”.

This evening Mr Robinson said: “I apologise face to face, personally, man to man, the way it should be done.”

Speaking outside Belfast Islamic Centre on Tuesday evening, Mr Robinson said that he respected the people he had met and understood just how important a role they played.

“This society does depend on people from ethnic and religious minorities for the day-to-day life of our province,” he said.

He added that he now wanted to draw a line under the matter.

Among those attending the meeting was Muhammad Asif Khattak, one of the two Pakistani men who was attacked in north Belfast at the weekend.

Mr Robinson came under fire last week for defending Pastor McConnell’s remarks. The first minister told the Irish News he would not trust Muslims involved in violence or those devoted to Sharia law.

However, the DUP leader said he would “trust them to go to the shops” for him.

At Stormont, earlier on Tuesday, assembly members condemned the recent racial attacks and expressed their opposition to racism, discrimination and intolerance.

SDLP MLA Alban Maginnis was scathing after the First Minister failed to turn up for the debate.

The assembly passed, without a formal vote, a motion calling for all parties to show leadership on the issue and urging the first and deputy first ministers to bring forward a racial equality strategy as a matter of urgency.


2 Responses to ONE WEEK AFTER HIS MUSLIM GO TO SHOP COMMENTS, ROBINSON SAYS: I APOLOGISE