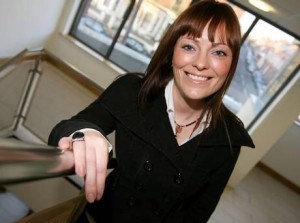 SDLP councillor Nichola Mallon has tonight been elected as the new Lord Mayor of Belfast.

She is only the third female Lord Mayor ever appointed in the city, following in the footsteps of Grace Bannister (Ulster Unionist) in 1981 and Naomi Long (Alliance) in 2009.

Councillor Mallon was co-opted onto Belfast City Council representing the Oldpark district in January 2010, and was voted back onto Council at the recent Local Government Elections.

She currently sits on the Parks and Leisure Committee and the Licensing Committee, having previously been a member of the Strategic Policy and Resources Committee and Development Committee.

As well as being involved in many local enterprise groups, she works closely with community, health and sports organisations with specific focus on connecting with young people and supporting older people.

The 34-year-old married last year and lists reading, exercise (in moderation!) and spending time with family and friends as her leisuretime interests.

Councillor Mallon said: “It is a tremendous honour to be appointed as the Lord Mayor of Belfast.

“I want to congratulate Máirtín Ó Muilleoir on a fantastic year in office and thank my own party for nominating me to take on such a privileged position.

“I have had the privilege of representing the Oldpark area, the place I grew up in, for the last four and a half years.

“The most wonderful part of being a councillor, for me, continues to be the many unsung heroes I get to meet – all those people who through their compassion and selflessness, makes this city the special place that it is.

“All of these people – our coaches, carers, volunteers, business people, community and faith workers – put their local community first.

“It is these very people, who too often go unnoticed, who have inspired my vision for my year as Lord Mayor.

“I want to take The Lord Mayor’s role out of City Hall and into people’s lives – their homes, their communities, their places of work.

“I want to connect with those who at times feel invisible in our city. I want to celebrate and showcase our unsung heroes who really are Belfast’s First Citizens.

“Belfast is a city for everyone. Where everyone belongs and where we are all the better for having each other. I look forward to the months ahead in my new role,” she added.