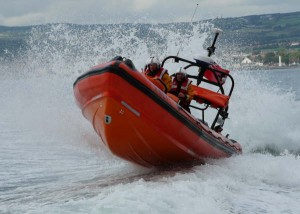 Donaghadee’s All-Weather Lifeboat, Saxon, launched at the weekend after reports of an object in the water off the coast of the Copeland Islands.

A witness described what appeared to be people in the water.

The charity which saves lives at sea took the decision to launch its £2m lifeboat and at full speed it was at the scene within 15 minutes.

The crew found a bunch of helium-filled party balloons which had come down in the sea.

Lifeboat coxswain Philip McNamara said: “While this was a preventative operation, the lifeboat volunteers prefer to attend at an early stage to avoid any risk to life. An object in the water can be a danger to shipping.”

The Donaghadee lifeboat has had a busy year to date rescuing holidaymakers, fisherman and yachtsmen.

Overall in Ireland, RNLI lifeboats launched 1,087 times in 2013 bringing 1,278 people to safety. On 10 occasions, lifeboat crews were also called upon to rescue animals. These included four dogs, two sheep, a cow, two whales and a dolphin.