THE FOCUS IS ON THIS YEAR’S ULSTER TATLER AWARDS 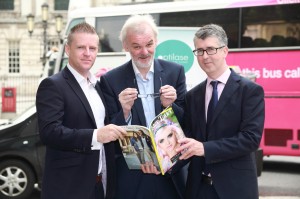 Pictured (l-r) along with Tim McGarry are Managing Director of Therapie Optilase, Mark Shortt and Editor of the Ulster Tatler Chris Sherry.

THE newly rebranded Ulster Tatler Awards is set to dazzle at Belfast City Hall on Thursday September 18 which will see local comedian and host Tim McGarry entertain on an evening that will focus on recognising businesses and personalities in Northern Ireland.

The gala event, in association with Optilase Eye Clinic, is now in its seventh year and has been created by the long-running magazine to celebrate those who have been featuring in its pages for almost 50 years.

Members of the public are invited to vote on the Ulster Tatler website www.ulstertatler.com or by the nomination form printed in the most recent edition of the magazine. All those who vote will be entered into a draw to win great prizes and votes must be received or registered by midnight on Thursday July 3, 2014.

Chris Sherry, Editor of Ulster Tatler, is looking forward to bringing the new and improved awards to the City Hall for the third year.

“Now into its seventh year, this year’s Ulster Tatler Awards promises to be bigger and better with the addition of the new awards as well as the already popular categories.

“Since 2008, the event has established itself as one of the most popular evenings on the Northern Ireland social calendar and we look forward to celebrating with all nominees and winners on the night,” said Chris.

“We are delighted to have Tim McGarry as the awards host who will ensure it’s a thoroughly entertaining evening.

“As always the anticipation is high to find out this year’s winners and we look forward to revealing who the celebrated Lifetime Achievement Award will go to, following in the footsteps of previous winners Dame Mary Peters, Brian Friel, Sir James Galway, Gloria Hunniford, Phil Coulter and last year’s Terri Hooley,” he continued.

Speaking of Optilase Eye Clinic’s sponsorship of the awards, Managing Director Mark Shortt said: “We are delighted to be supporting the Ulster Tatler Awards and putting a focus on the achievements of local businesses and personalities throughout Northern Ireland. As a local business itself, Optilase is excited to be involved in recognising the local accomplishments of others.”