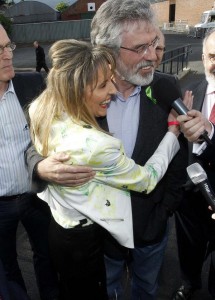 IN the end it was as you were in the Euro 2014 election with Sinn Fein, the DUP and UUP reclaiming their seats to Brussells,

But there will now be a post mortem into how to speed up vote counting with the Electoral Office urging politicians to bring in an electronic system to add up the ballot papers.

Sinn Fein’s Martina Anderston topped the poll with the DUP’s Diane Dodds coming in second and Jim Nicholson of the UUP in third placed MEP.

In a grueling coun at the Kings Hall in Belfast spanning more than 24 hours, Mr Nicholson got in ahead of the SDLP’s Alex Attwood, who was eliminated at the final stage.

After his election, Mr Nicholson said: “I don’t think any of us will forget these two days.

“They have been long, and a bit of a white-knuckle ride at times, but it has been a very good election.”

Ten candidates had been competing for the three seats in Europe.

Mrs Dodds, who got in on the back of transfers of TUV leader Jim Allister, said she would fight to secure the best deal for Northern Ireland in Europe.

“The DUP has always been a Eurosceptic party, we are not Johnny-come-latelys to Euroscepticism,” she said.

“What we do believe is that this election really wasn’t about whether we are in Europe or out of Europe.

“That’s what I will be doing, as well as continuing my campaign for a referendum to give the British people their democratic say on our relationship with Europe.”

Martina Anderson took just over a quarter of the vote, with 159,813 first preferences.

At 9 am this morning, counting resumed at 3.45 pm Anna Lo of Alliance and Jim Allister of the TUV were eliminated.

Others eliminated earlier in the count were Henry Reilly UKIP, Mark Brotherston from the NI Conservatives, Tina McKenzie, NI21, and Ross Brown of the Green Party.

The Electoral Office for Northern Ireland has been criticised for its handling of the process.