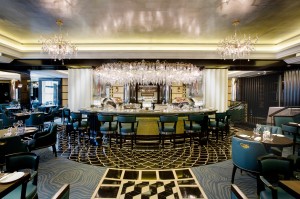 A Northern Ireland fit-out firm has been listed among the UK industry’s best performers at the NAS Design Partnership Awards in London.

McCue Crafted Fit took top honours in the leisure category for its refit of Kaspar’s Seafood Bar and Grill in the luxury London hotel, The Savoy.

The project was part of a major two-year refurbishment programme for the 124-year-old venue which regularly counts royalty, world leaders and Hollywood legends on its guest list.

Named in honour of the hotel’s feline mascot, the art deco-themed Kasper’s reopened to critical acclaim last year and includes a three-foot high cat sculpture to stave off bad luck.

“Kasper has been the Savoy’s lucky mascot for more than 80 years and it’s nice to think that some of that good fortune has stayed with us.

“It is important for us to measure ourselves against the very best in the business and honours like the NAS Awards show that year-on-year we are continuing to excel in very competitive markets.

“This was a high profile project and we were pleased to be associated with such an celebrated restaurant.

“The Savoy is an iconic venue with a rich heritage and this project was a great opportunity for our team to show our capacity and capability to deliver for customers like this.

“The McCue team has completed a number of creative projects within the hospitality and leisure sectors in recent years, including The Savoy.

“These awards recognise the silver service that we give our customers and our ability to meet and set exceptional standards.”

McCue was the only Northern Ireland-based company honoured at the awards which recognises the very best Design and Shopfitting projects across the UK and is judged by an independent panel of distinguished commentators, designers and fit out practitioners.

Robert Hudson Director of the National Association of Shopfitters commented:

“It’s been another tough year for shopfitting and interior contracting, but this has had no effect upon the quality or the quantity of the entrants for the NAS Design Partnership Awards 2014.

“This was a field of winners that really does show what collaboration between store designers and shopfitters at the top of their game are capable of.”

In the last two years, McCue has secured a string of contracts in London’s luxury hospitality sector completing fit-out projects for the Berkeley in Knightsbridge and Mayfair-based duo Claridges and the Beaumont.

It has fitted out up-market Dublin eatery Cleaver East and buzzing Belfast bars The Albany and Harp Bar. In December, McCue took the first steps into the lucrative marine fit-out sector, appointing industry stalwart Stephen Mills as head of its new division.