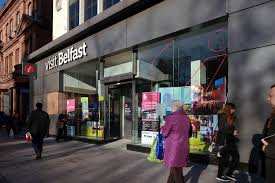 The Visit Belfast Welcome Centre – which relocated opposite City Hall last year after a £1.82 million facelift – and the Mary Peters Athletics Track – recently renovated with £3 million of improvements – picked up prizes for their striking and innovative design at the awards, held on Thursday 15 May at Belfast Waterfront.

Both schemes were delivered as part of the council’s £150 million Investment Programme, which is undertaking projects in all parts of Belfast, with over £75 million of improvements either completed or underway.

Design firm URS scooped the inaugural Public Works Award, sponsored by DCAL, for their work on the Welcome Centre, which the judges described as “stylish and sophisticated” and “bringing a European feel to Belfast’s central core”.

Their brief involved redeveloping the former bank premises into a state-of-the-art, modern visitor centre to meet the needs of Belfast’s growing tourist base.

Local company Gregory Architects also claimed the top prize in the £500,000 to £3 million category for their role in upgrading the Mary Peters Athletics Track in south Belfast.

The venue, which hosted several events at last year’s World Police and Fire Games, is at the heart of the local athletics scene, thanks to an international standard eight-lane track, revamped field events area and modern spectator stand.

“Congratulations to both architectural teams on their awards – a fitting tribute to the individual flair and high quality design at heart of these projects,” said Gerry Millar, Director of Property and Projects.

“Our Investment Programme is all about affecting real change for people and communities, through projects which bring long term benefits for our city.

“Working in partnership with local talent is key to delivering this, with hard work and creativity resulting in modern assets which will serve our residents for years to come.”

The RSUA Awards cap a successful week for schemes delivered through the council’s Investment Programme.

Another project, the transformation of a derelict site into mini 3G soccer pitches at Springmartin, was also highly commended in the Community Benefit category at the Royal Institution of Chartered Surveyors Awards.