£20M TO BE SPENT ON BELFAST RAPID TRANSIT BUSES 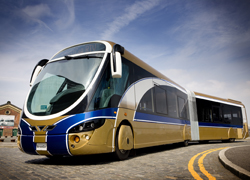 How the new rapid transit buses will look like

ROADS Minister Danny Kennedy has announced that £20 million is to be spent on new buses for the Belfast Rapid Transit system.

The Ulster Unionist MLA also revealed that work has officially started on the BRT with the construction of a 520 space park-and-ride facility in Dundonald, east Belfasat.

The BRT will link the city centre with west and east Belfast and the Titanic Quarter.

Mr Kennedy said it is hoped the BRT systeme will be fully operational by 2017.

His department is to spend £20 million on 40 “rapid transit vehicles” to delivered in time for the start of the project.

The vehicles are state of the art larger buses that will operate along the routes every five to eight minutes at peak times.

Speaking on Monday in east Belfast, Minister Kennedy said: “This facility is due to become operational by the end of 2014 and will be served by existing buses until the start of Belfast Rapid Transit services in 2017.

“It will further enhance the park and ride offering for commuters travelling to Belfast, in particular those travelling from the Ards Peninsula.”

Work on the new project is expected to start next month.