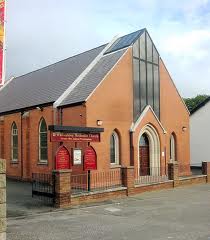 THUGS tried to burn a church to the ground in an arson attack.

Arsonists broke in through the front door of Whiteabbey Methodist Church, on Shore Road, north Belfast and tried to light three fires inside the premises.

A kitchen at the rear of the church was extensively damaged in the blaze.

The alarm was raised around 11 pm on Saturday night and fire crews raced to the scene and prevented the blaze reaching the main church building.

Rev Pauline Lorimer said she was “saddened” that her church was targeted.

“I don’t see how anybody can get any kind of kick out of destroying something that’s good,” she said.

“We had to have our service this morning in the Presbyterian church halls, which they very kindly opened for us.

“The church is badly smoke damaged and the forensic people have only just left.

“The halls are just newly finished and people are very proud of them. It’s sad to see them being destroyed like this.”

Detectives at Newtownabbey CID have appealed for witnesses or anyone who has information who started the fire to contact them on the non-emergency 101 number.


One Response to METHODIST CHURCH DAMAGED IN ARSON ATTACK