IRA SUPERGRASS RAYMOND GILMOUR: I WILL EXPOSE MARTIN MCGUINNESS AS A MURDERER

EXCLUSIVE: FORMER IRA supergrass Raymond Gilmour says he is prepared to break his cover and give evidence in court against Martin McGuinness.

Gilmour says he will give sworn testimony in Northern Ireland that the deputy first minister ordered a catalogue of murders in Derry.

In an interview with the the Belfast Daily, Gilmour said: “I am now prepared to come forward and make statements under oath against Martin McGuinness about the murders he ordered.’’

Martin McGuinness has two previous convictions in the Republic for IRA membership but has never been convicted of any offences in Northern Ireland.

Gilmour has been living outside Ulster at a secret hideaway address and under a new identity for over 30 years after giving evidence at a supergrass trial.

At the time of the trial in 1984, Martin McGuinness was the IRA’s ‘Chief of Staff’ but Gilmour says he still “ruled the roost’’ in the Derry Brigade.

“When I made my statements at the time, the RUC were not interested in the activities of Martin McGuinness.,’’ says the 54-year-old

“He was the top Provo in Derry at the time and the police didn’t want to put him away at the supergrass trials. ‘’

Gilmour – who was codenamed by RUC Special Branch as ‘Agent Romeo’ – says he wants to do right by the victims of the IRA and help put those who ordered and carried out the murders behind bars.

“Nothing happened in Derry without McGuinness’s say so. He was a ruthless, ruthless man. He is now the deputy first minister but he appears to have forgotten all about his past in Derry.’’

Gilmour claims McGuinness gave the orders for the murder of:

• British soldier Christopher Shenton, 21, who was shot dead by an IRA sniper in January 1981 as he manned an observation post at Castle Gates , Derry which overlooked the republican Bogside district;

• Protestant Joanne Matthers, a Census worker, who was shot dead Mrs Mathers was shot dead in Gobnascale’s Anderson Crescent in Derry as she collected forms in 1981.

Gilmour made a secret 24 visit to Ulster last week to sign copies of his new book ‘What Price Truth?’ before slipping back to his hideaway address in England. 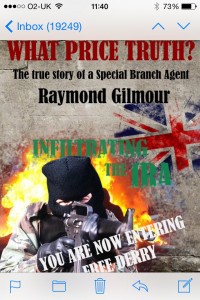 He says he has no plans to resettle in Northern Ireland.

“If I can get justice for the victim’s of IRA murders that McGuinness ordered then I will have lifted a burden off my shoulders. I have been carrying this around for 30 years.

“McGuinness was the man who taught me and republicans in Derry anti-interrogation techniques to prepare us for our arrest by the RUC and British Army.

In a statement, a Sinn Féin Spokesperson, quoting the Judge at the Gilmore supergrass trial, said:

“On December 18th 1984 the Presiding Judge Lord Lowry ruled that Gilmour was not a credible witness.

“He said he was ‘entirely unworthy of belief…a selfish and self regarding man to whose lips a lie comes more naturally than the truth’.

• ‘What Price Truth?’ is published on Amazon Kindle.


10 Responses to IRA SUPERGRASS RAYMOND GILMOUR: I WILL EXPOSE MARTIN MCGUINNESS AS A MURDERER