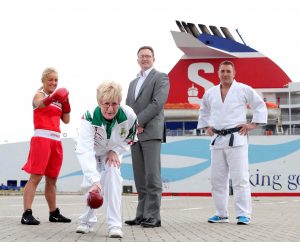 As the official ferry partner for Team Northern Ireland, Stena Line will transport athletes onboard their Superfast ships between Belfast and Cairnryan over the coming months as they train and compete in the various arenas and stadiums in Glasgow. The Northern Ireland team includes athletes from sporting disciplines such as boxing, lawn bowls and judo who have all won a place at Glasgow 2014 this summer.

Stena Line’s Route Marketing Manager – Irish Sea North, Neil Palmer, said: “Excitement is building for the Commonwealth Games in Glasgow and we’re delighted to support the team of athletes from Northern Ireland by providing them with essential support. We are proud to play our role in getting the Team Northern Ireland to Glasgow, via our Belfast to Cairnryan route, safely, on time and refreshed and we’re hoping for lots of medals during the competition, whatever the colour.

“Taking part in the Games will surely be the fulfillment of a life-long dream for these athletes and we wish them the best of luck, particularly the Northern Ireland first ever female boxers as this will be the first time they compete in the history of the Commonwealth Games .”

Robert McVeigh, Chair of the Northern Ireland Commonwealth Games Council, said: “Our partnership with Stena Line is a real comfort to our athletes as it provides them with an excellent service and a very relaxing way to travel.

“Lots of our competitors have used the service already due to the comfort available onboard and the no baggage restrictions and no outsize baggage charges are great money-savers for our athletes as many have large pieces of luggage and equipment essential for their sport. Plus, the frequency of service offers flexibility to fit with the athletes’ schedules.

“Our Games Management Team has been making regular trips on Stena Line which is great as they can support the athletes throughout their Commonwealth journey.” Robert added.