MUSGRAVE RETAIL PARTNERS AND ACTION CANCER ARE A WINNING PARTNERSHIP 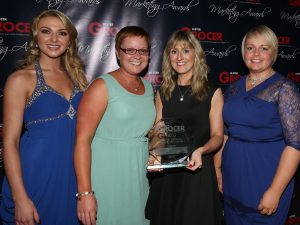 The accolade was presented to the company for its commendable partnership with local charity Action Cancer which is now in its 13th year.

Since 2001 Musgrave’s SuperValu brand and retail partners have supported Action Cancer’s mobile services, and for the past 10 years its Centra retailers have backed the charity’s health promotion programme for young people – Health Action.

Together the two programmes, under the ‘Action Against Cancer’ banner, produce a substantial and measureable impact on cancer detection and prevention – saving lives now and in the future.

SuperValu’s support of Action Cancer’s Big Bus mobile has helped bring life-saving detection services to thousands of people, including 5,000 in 2013. With Centra’s support Action Cancer has been able to deliver healthy lifestyle messages to almost 500,000 young people at schools across Northern Ireland – 21,000 in 2013.

Musgrave was also shortlisted in the ‘Best Marketing Campaign’ category for its 2013 Price Drop campaign.

‘Price Drop’ was created in response to the ever-increasing cost of living, and undertook to help shoppers by permanently reducing prices on thousands of products across SuperValu and Centra stores – amounting to half of the entire grocery range stocked in an average shop.

Managing Director of Musgrave Retail Partners, Nigel Briggs, said: “Our strategic focus on health, and particularly cancer prevention, detection and support enshrined in the ‘Action Against Cancer’ Campaign has become a core impetus for management, staff, suppliers and customers – uniting all stakeholders in a common cause.

“We’re delighted to be recognised for the dedication both our independent retailers and central staff show in their fundraising efforts and last year saw us reach a major milestone in raising over £2m for Action Cancer since the beginning of our partnership,” he added.

MRPNI supports over 250 independent SuperValu, Centra and Mace retail stores in Northern Ireland, with a combined turnover in excess of £600 million. MRPNI is part of the Musgrave Group, the leading partner to more than 3,500 entrepreneurial retailers and food service professionals in the UK, Ireland and Spain.