MISSING MAN MAY BE IN NORTHERN IRELAND 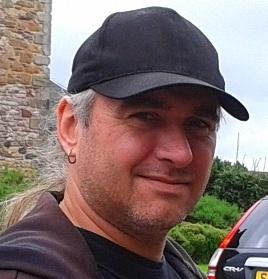 THE PSNI is assisting West Mercia Police in seeking help from the public in tracing a 44-year-old man who has gone missing.

Christopher Matthews (pictured right) left his home in Albion Road, Malvern, to go to work in Birmingham on Thursday 8 May and did not arrive.

He is described as 6ft tall, with long greying brown hair and has a dragon tattoo on his upper left arm plus a scar on his elbow.

When last seen he was wearing black boots, black jeans, a black T-shirt and a black jumper.

PC Max Digger said: “We are concerned for Mr Matthew’s welfare and his partner is very worried about him.

“He has been missing for a week and has not responded to his mobile phone messages. Mr Matthews is a stage manager in the music industry – based at offices in the Custard Factory, Digbeth, Birmingham – but travels the country for work. However, it is completely out of character for him to disappear without warning and fail to respond to messages.

“I am appealing to Mr Matthews directly to contact the police, his partner or work colleagues. They are very concerned about your disappearance and all they want is to know that you are safe and well.”

Anyone with information about Mr Matthews and his whereabouts is asked to call police immediately on the non emergency number 101 quoting incident number 303s 100514.

Alternatively information can be passed on to the charity Missing People. The Helpline number is 116 000.