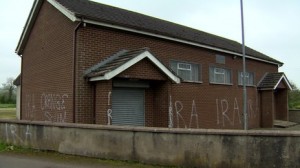 POLICE are investigating after republican graffiti was daubed overnight on an Orange hall in Co Antrim.

The graffiti was sprayed on Fourscore Orange Hall, near Glenavy.

IRA slogans and along with “Orange scum” were painted on the brickwork.

The incident happened overnight between Tuesday and Wednesday. Police are treating the incident as a hate crime.

It is believed to be the fourth reported attack on Orange property this year.