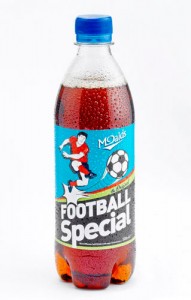 McDaid’s ‘Football Special’ drink to be made in Northern Ireland

A REPUBLIC of Ireland soft drinks firm has shocked staff by announcing they are moving production to Northern Ireland.

McDaid’s ‘Football Specials’ drinks are famous throughout throughout the Republic but are a Donegal institution, as it’s produced at its historic home in Ramelton.

The two most popular flavours produced by McDaid’s are banana and, the most popular, Football Special, is apparently made with a mix of seven ‘secret’ flavours.

It is believed that staff were called to a meeting yesterday, at which it was outlined to them that production would be moved to the Maine group in two months time.

They will take over the Football Special and Banana flavoured drinks synonymous with Edward McDaid and his firm.

The news has been met, with both shock and sadness by locals in Ramelton, that this historic Donegal brand is set to move its production into Northern Ireland.

It is expected that up to six jobs may be affected by the proposed move.

The McDaid family are yet to comment on the developments of the past 24 hours.