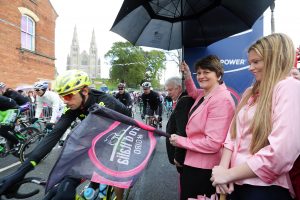 Pictured starting the third stage of the race, the Minister cheered the cyclists as they began their journey to Dublin.
Picture by Kelvin Boyes / Press Eye.

ENTERPRISE,Trade and Investment Minister Arlene Foster has waved goodbye to the Giro d’Italia’s Grande Partenza as the world’s cycling elite set-off from Armagh.

Since the race began at Titanic Belfast on Friday, the cyclists have travelled over 265 miles at speeds of up to 40 miles per hour.

Starting the final Northern Ireland stage of the race in Armagh, the Enterprise Minister, Arlene Foster said: “Once again Northern Ireland has proved that, in rain or shine, we can host top-class major events. Thousands of people braved the showers and lined the streets over the weekend as the one of the world’s most spectacular cycling events journeyed through our streets.

“The Giro d’Italia is known as the ‘world’s toughest race in the world’s most beautiful place’ and now that it has had its ‘big start’ in Northern Ireland, I think the 775million people who tuned in to watch it from 174 countries will agree with that.

“With the world looking on, the positive exposure for Northern Ireland is expected to generate a PR value worth around £10m. There will also be a significant economic return, with local businesses and the hospitality sector benefiting from the influx of tourists who came to see cycling’s elite battle for the coveted pink jersey.”

Not only did the Giro d’Italia capture the imagination of people living here, as the pink theme was embraced and spectators turned out to cheer on the competitors, but Northern Ireland has impressed the many visitors who have travelled from far afield.

Arlene Foster continued: “Over the last few days I have had the pleasure of meeting a number of individuals who had travelled to Northern Ireland for the first time and they have been overwhelmed with the warmth of the welcome they have received, and by the beauty of our landscape.

“The race organisers and international media have also been hugely impressed by the numbers who have turned out to see the event and to enjoy the festival atmosphere around it.”

Acknowledging the team effort required to deliver a major sporting event, Arlene Foster concluded: “An event such as this doesn’t just happen. It requires weeks of preparation and I would like to thank everyone who was involved in making the Grande Partenza a success – from the huge band of dedicated and enthusiastic volunteers to anyone who got ‘in the pink’ to support the race.

“Bringing the world’s second biggest cycling race to Northern Ireland was about proving on the international stage that we can deliver when it comes to staging major events. It was, of course, also about showcasing our tourism product to the world. We have achieved both of those objectives and much more.

“I believe that hosting the Giro d’Italia has lifted Northern Ireland to a new level. We have already announced that the Irish Open is returning in 2015 and 2017, and I have every confidence that more major events will follow in the years ahead.”