DAY THREE OF GIRO AS RIDERS RACE FOR THE BORDER 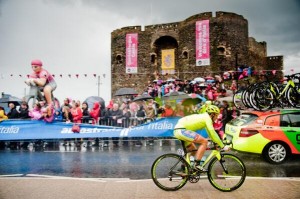 IT’S the third and final stage in Northern Ireland of the Giro D’Italia which began in Armagh at 11 on Sunday and will finish in Dublin later this afternoon.

Once the riders hit the border it will be a sprint to Dublin to see who wins the pink shirt.

The second day of the The Giro d’Italia visited the scenic North Antrim coastline as the heavens opened.

Around 200 cyclists left Belfast and travelled along the north coast before returning to the city.

Tens of thousands of spectators lined the route to watched the second stage in pouring rain.

The second stage was won by German rider Marcel Kittel with a time of 5 hrs 13 mins and 12 seconds.

Northern Ireland has been hosting the initial stages of the race over three days, as 22 teams begin their attempt to win the prestigious title.

Many roads along the route will be closed throughout the day. Motorists have been warned to expect disruption.

Full details of road closures can be found at: www.trafficwatchni.com/giro.