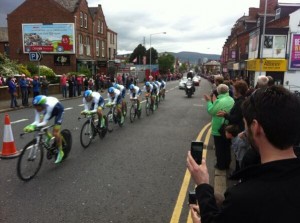 THE Giro d’Italia has started in Belfast in a blaze of pink.

Road closures are in place across south and east Belfast as thousands of fans line the route for the second biggest race in the world.

Northern Ireland is hosting the initial stages of the competition over the next three days, which will see about 200 cyclists race through the streets.

A total of 22 teams are competing for the prestigious title.

The athletes were welcomed to Northern Ireland on Thursday evening at the official opening ceremony in Belfast.

About 5,500 members of the public gathered at Belfast City Hall as the teams were introduced on stage.

The actual race has started across east Belfast.

Stage one of the competition is a team time trial from Titanic Quarter to Stormont and on to Belfast City Hall.

The cyclists will travel to Stormont via the Newtownards Road then make their way through south Belfast to the city centre. 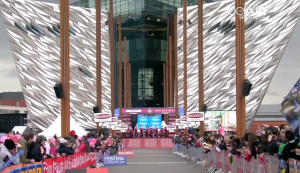 Motorists have been warned to expect disruption in the city on Friday and to use alternative routes.

Spectators have been advised to walk, cycle or use public transport to get to the event.

On Saturday, the race moves on to the north coast, travelling along one of Northern Ireland’s most scenic routes.

The third and final stage begins in Armagh on Sunday, as the competitors race over the border for a sprint finish in Dublin.

The Giro d’Italia is the biggest sporting event ever staged in Northern Ireland, with competitors from more than 30 countries taking part.


One Response to GIRO D’ITALIA RACE UNDERWAY IN NORTHERN IRELAND