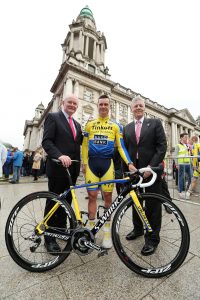 The Ministers were speaking ahead of the presentation of the international teams of elite cyclists as they prepared to take part in one of the world’s biggest sporting events.

“The 2014 Grande Partenza will be a fantastic spectacle which will be viewed by almost 800 million around the globe and there is no doubt the worldwide media coverage generated from it will promote tourism and attract foreign direct investment to help grow Northern Ireland’s economy.

“Northern Ireland continues to build on the legacy of events such as last year’s G8 Summit and the World Police and Fire Games. We have more great events to look forward to with the Irish Open coming to Royal County Down and the Lough Erne Resort in 2015 and 2017.

“I send my best wishes to all those participating in any way in this superb event.”

The deputy First Minister Martin McGuinness said: “We are deeply honoured that the 2014 Giro d’Italia Big Start is from here in the north of Ireland – the first time the race has ever been outside mainland Europe.

“We have a strong connection and affinity with the Giro with Stephen Roche winning the race in 1987. Cycling has experienced unprecedented growth in Ireland in the last few years. People of all ages and abilities have started to get involved and that makes the hosting of the Giro even more significant.

“This exceptional opportunity to host the Giro offers us a platform to showcase the best of what we have to offer as an attractive place to do business, visit, study and live.

“I encourage people to ‘go pink’ and not miss out on a once in a lifetime opportunity to support the cyclists en route. The preparations are now over and I wish everyone who participates in the 2014 Giro Big Start the very best of luck.”


One Response to BENVENUTO GIRO D’ITALIA – ROBINSON AND MCGUINNESS