GIRO FEVER HITS BELFAST AS 1,200 VOLUNTEERS GEAR UP FOR THE GRAND PARTENZA 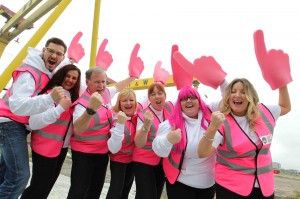 It’s this way to the Giro d’Italia… Will Vicente, Nadene Alexander, David Livingstone, Gillian Gilliland, Pleasaunce Perry, Karolyn Gaston and Lorna Bolster are just some of the 1,200 volunteers signed up to help with the Giro d’Italia

WITH 1,200 volunteers signed up to help with the Giro d’Italia in Northern Ireland this week, the Northern Ireland Tourist Board (NITB) says visitors can look forward to a warm welcome during the three day event.

140,000 spectators are expected to visit Northern Ireland to watch the world’s second largest bike race which promises excitement, drama and thrills from Belfast, through the magnificent Causeway Coastal Route and the historic city of Armagh.

The majority of the volunteers have come from the Volunteer Now database of 2013 World Police and Fire Games volunteers who were recently described as ‘the spirit of the games’ after the event was hailed the best and friendliest ever – with the remainder having been selected from cycling clubs throughout Ireland, sourced by Cycling Ulster and Cycling Ireland.

Susie McCullough, NITB’s Director of Business Support and Events, explained: “Northern Ireland will once again be on the world stage this week with the Giro d’Italia, and as the biggest sporting event to take place here this year, it really is a fantastic opportunity for volunteers. All 1,200 volunteers have received training and support from Volunteer Now, so it is a great way for people to develop their own skills base.

“People from around the world always comment on how friendly we are here in Northern Ireland so the Giro d’Italia volunteers have a very important role to play in ensuring everyone feels welcomed and has an enjoyable experience. On behalf of the Northern Ireland Tourist I’d like to wish all of the volunteers the best of luck over the coming days.”

Karolyn Gaston from Jordanstown has been volunteering for 20 years and said: “I am very excited about being a volunteer at the Giro d’Italia, this is like winning the lottery to me. I’ve always been interested in cycling and I can’t wait to enjoy the festival atmosphere and see the smiles of visitors who are having an amazing time.”

Lorna Bolster from Derry~Londonderry first took part as a volunteer at the 2013 World Police and Fire Games added: “I am looking forward to being part of this huge event and showing people from around the world what Northern Ireland has to offer.”

This event is supported by NITB and part funded by the European Regional Development Fund under the European Sustainable Competitiveness Programme for Northern Ireland.