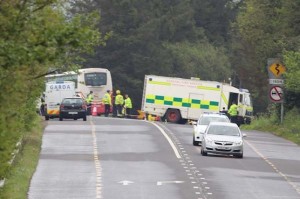 ONE of the three children injured in yesterday’s crash involving a car and a bus in which their mother was killed has been transferred to the Royal Victoria Hospital in Belfast for treatment.

The woman, in her 30s, was pronounced dead at the scene of the collision which occurred at around 3.30pm on the main Derry to Letterkenny road in the townland of Ardee near Newtowncunningham.

She was the driver of a car that was involved in a collision with a Bus Eireann bus.

Her body was removed to Letterkenny General Hospital for a post-mortem examination.

Her three children who were in the car at the time were taken by ambulance to Altnagelvin Hospital in Derry.

One of them has since been transferred to the Royal in Belfast for further treatment.

The driver of the bus was uninjured.