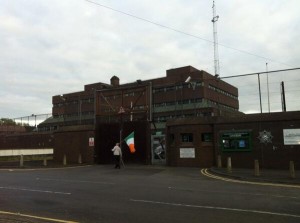 AS GERRY Adams prepares for a third night in the sparse surroundings of the serious crime suite in Antrim, Sinn Fein has condemned his extra detention for questioning about the brutal abduction and murder of Jean McConville 42 years ago.

The party’s North Belfast MLA Gerry Kelly reacted angrily to the news this evening that an extension had been given to the PSNI to hold the Sinn Fein president for a further 48 hours.

“The arrest and continued detention of Gerry Adams is deliberately timed to coincide with the elections in three weeks time.

“This is political policing at its most blatant.

“Sinn Féin will not be intimidated by the action of a small cabal in the PSNI who are opposed to the peace process and political change.”