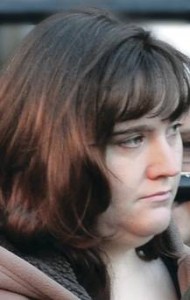 THE congregation of a Church of Ireland parish are finding it “difficult and challenging” to forgive their former treasurer who stole £60,000 from its coffers.

Crooked Lyndsey Bredin has now left the Church of Ireland and joined the Methodist Church.

In statement, a Church of Ireland spokesperson for the grouped parishes of Culmore and Muff said the breach of trust by Lyndsey Bredin was both “traumatic and painful” for Church members.

Bredin, of Primity Crescent, Newbuildings, pleaded guilty to 19 charges of theft by an employee and was given an 18 month suspended jail sentence at Derry Crown Court yesterday.

The offences took place between March 2010 and October 2011.

The 27-year-old was the honorary treasurer of the Culmore and Muff Church of Ireland parish and stepped down as treasurer after the theft was reported to police in November 2011.

The cash had been donated by people in the memory of dead relatives to a church restoration fund.

She spent the money she stole on a new car, foreign holidays, nights out at restaurants and paying for bills.

The theft was discovered when new Minister Rev Robert Millar arrived to cover the Culmore and Muff congregations in 2011 and found her failure to provide financial records odd.

Imposing the suspended prison sentence, Crown Court Judge Phillip Babington said it was “extremely disappointing that not a penny has been repaid.”

The said the offending had “adversely affected” the financial future of the churches for a “very long time into the future.”

Describing the theft as “traumatic and painful,” a spokesperson for the parishes said Church members were continuing to work together to face both the financial loss and pastoral consequences of the “breach of trust.”

The spokesperson added: “Jesus’ call to forgive and pray for those who have wronged us is difficult and challenging.

“We can only continue to pray for the strength to behave, as God would have us.”

He added: ‘We look forward to reading the judge’s full ruling to understand the appropriateness of a suspended sentence for a theft of some £60,000.”

He said the diocese and the Select Vestry of Muff and Culmore would be making no further comment on the matter.

Meanwhile, Bredin has left the Church of Ireland and joined Newbuildings Methodist Church.

Last night those who knew her said they were “glad to see the back of her.”

One woman who donated money to the Muff restoration fund said: “I know it is the Christian thing to do, to forgive, but I haven’t seen any remorse.

“The Methodists are welcome to her. Just don’t let her count the Sunday collection unsupervised. That would be my advice.”