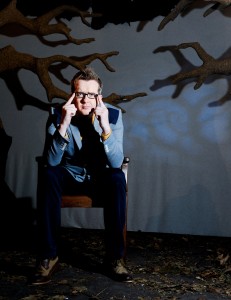 Pubgoers in Portadown are set for a GREAT time this Friday As TV star, mentalist and illusionist, David Meade performs a special pop-up show at The Head O’The Road in Armagh.

PUBGOERS in Portadown are set for a GREAT time this Friday as TV star, mentalist and illusionist, David Meade performs a special pop-up show at The Head O’The Road in Armagh.

The quaint country pub, located just outside Portadown, was chosen by Pubs of Ulster at random to win a night’s entertainment with the hit TV star as part of The Great Ulster Pub Week, which kicks off this week.

Hot on the heels of shooting his first USA based TV special, David Meade will perform at the intimate, free ticket-only event to an exclusive audience of 50 people at The Head O’The Road this Friday, 2nd May 2014 at 7.30pm.

With a live show that is as hilarious as it is jaw dropping, the enigmatic entertainer will reveal secret facts and thoughts of audience members; detecting lies and influencing those around him with seemingly inexplicable results. There’s no place for Meade to hide; no camera tricks or mirrors as the audience get up close and personal with him as he attempts to make them believe he can control their minds.

Commenting on the unique event, David Meade said: “I’m thrilled to join forces with Pubs of Ulster to put on this unique event as part of The Great Ulster Pub Week.

“Our pubs play such an important role in the cultural fabric of life in Northern Ireland and it’s exciting to be putting on a show to such an intimate audience in a Great Ulster pub.”

In addition to the special David Meade show, Pubs of Ulster are sending a touring magician and caricature artist around Northern Ireland during The Great Ulster Pub Week (1-9 May 2014) to provide further surprise pop-up entertainment to unsuspecting customers in participating pubs.

“For nine days and nine nights, The Great Ulster Pub Week will create a real buzz, serving as an important reminder of how ‘Great’ Ulster’s pubs truly are.”

The pop-up entertainment represents just a handful of the Great events and surprises the public can expect to find in pubs during The Great Ulster Pub Week.

The Great Ulster Pub Week will be the biggest pub centric multi-venue event seen in Northern Ireland and will showcase all that’s ‘Great’ about the Ulster pub. Over 160 pubs from right across Northern Ireland are signed up to be part of the exciting pub celebration, with hundreds of unique events showcasing great food, great entertainment and great craic set to take place.

And as the build up for the Giro d’Italia begins, many pubs are dialling up the Pink Power, with special Giro themed promotions, competitions and events running as part of their Great Ulster Pub Week programmes of activity.

The Great Ulster Pub Week will kick off on Thursday 1st May 2014 with a World Record attempt to stage the world’s largest simultaneous multi-venue pub quiz in association with Downtown Radio, in aid of Cash For Kids. The attempt, which will see registered Great Ulster Pub Week pubs across NI take part in the live pub quiz, will be broadcast on Downtown at 10pm on Thursday 1st May, and aims to beat the current record of 2,679 participants in 39 venues. So far, over 30 pubs have signed up to take part. A full list of participating pubs is available at www.downtown.co.uk/pubquiz for people wanting to take part in the historic World Record attempt.

Tickets to the David Meade show at The Head O’The Road will be allocated on a first come, first served basis. Contact the venue for further information on 028 3885 1322.