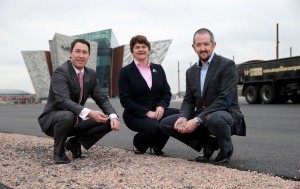 LOCAL company John McQuillan Contracts, part of the family owned McQuillan Companies has completed a technical challenge ahead of the Giro d’Italia visit by becoming the official technical partner for The Grande Partenza or ‘Big Start’ of the global event.

The private sector company, which operates from five locations in Northern Ireland, has provided expertise in the construction of the Giro Team Paddocks area in Belfast’s Titanic Quarter. The challenge was to provide a high quality solution for the global cycling event on Titanic slipways in just less than three weeks.

Welcoming the completion of the McQuillans project, Enterprise, Trade and Investment Minister Arlene Foster said: “The Giro d’Italia is an iconic event which will put Northern Ireland’s tourism product on the global stage in front of an audience of millions of cycling and sports enthusiasts.

“As excitement builds in the run-up to the big race, it is very encouraging to see a local, independent company like McQuillans playing such an important role as the event’s official technical partner.

“Their knowledge and expertise has helped create a world class paddock area for the cycling teams and further demonstrates that Northern Ireland can deliver for major international events.”

Paul Brogan, Director at McQuillans said; “We were delighted to be appointed as the official technical partner for this project and also demonstrate our support for local government in attracting a global event of this nature to the city. The Titanic Slipway area has literally been transformed into a Paddock where 22 of the world’s leading pro cycling’s teams will be based during the Belfast stages.

“Within a very limited construction period of two and a half weeks with a team of only 25 men, we prepared and drained the area and finally surfaced 15000m2 (4.5 acres) with asphalt concrete. In keeping with the Giro theme, drainage on the site is finished with a layer of pink aggregate.”

Over 200 professional cyclists from across the world will be in Northern Ireland. The Team Giro Paddocks area is set to become the main spectacle of the event with the first two stages due to take place there on the 9th and 10th May alongside a range of planned events and activities for the whole family.

Philip Corr, Project Manager from Titanic Quarter said: “The eyes of the sporting world will be on Titanic Quarter for the Giro d’Italia and we look forward to welcoming tens of thousands of spectators to watch world-class cyclists at what is one of Europe’s largest waterfront regeneration projects. The Giro will significantly enhance Titanic Quarter’s stellar reputation for hosting events with a truly global appeal and provide an example of the flexibility of our space. On the exact spot from which great ships were launched, we will now launch the Giro d’Italia big start 2014.”

“Significant enabling works have been carried out to ensure the site meets the specifications required to host the event, not least the building of the 4.5-acre team paddock, which will accommodate 22 of the world’s finest cycling team coaches and support cars. Huge credit must go to John McQuillan Contracts Ltd, the technical partner who delivered the paddock to a superb quality and ahead of schedule.

“This unique solution has not only made it possible to host the Giro D’Italia big start, but will also provide a legacy for future events. Titanic Quarter would like to thank Northern Ireland Tourist Board and Shadetree Sports for their contributions and the key funders on the project – Titanic Belfast Ltd, Titanic Quarter Ltd, Titanic Foundation. Without their enthusiastic support and contribution this would not have been possible.”

McQuillan Companies are a Northern Ireland based family run business which incorporates a diverse range of services including; civil engineering, demolition, quarrying, hazardous and non-hazardous waste management, outdoor cleaning services and analytical chemistry. A fourth generation business operating for over 100 years through the parent company John McQuillan Contracts. The company also operates out of Antrim, Belfast, Carryduff, Dromore, and Lisburn

Funding for the Grande Partenza will come from a range of tourism stakeholders and sponsors, including the Department of Enterprise, Trade and Investment (DETI) through the Northern Ireland Tourist Board, part funded by the European Regional Development Fund under the European Sustainable Competitiveness Programme for Northern Ireland.