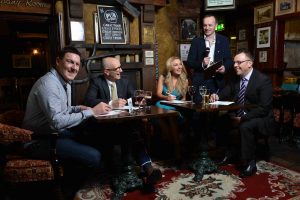 THE Great Ulster Pub Week will kick off on Thursday 1st May 2014 with a World Record attempt to stage the World’s Largest Multi-Venue Pub Quiz.

The daring attempt, which is being undertaken by Pubs of Ulster in association with Downtown Radio and children’s charity, Cash For Kids, aims to beat the current record for the World’s Largest Simultaneous Quiz of 2,679 participants in 39 venues.

Over 30 pubs across Northern Ireland have already signed up for the exciting multi-venue event, with more expected to join the roster in the run up to the event on Thursday. From Belfast to Bangor, Donaghadee to Draperstown, Irvinestown to Portrush and towns and cities across Northern Ireland, the public can play their part in this historic World Record attempt

The Great Ulster Pub Week World Record Attempt Quiz will be broadcast live on Downtown Radio from The Errigle Inn, Belfast at 10pm on Thursday 1st May 2014, with participating pubs tuning in to take part in the same quiz at the same time.

Commenting on the exciting event, Colin Neill, CEO, Pubs of Ulster said: “The Great Ulster Pub Week is all about celebrating what’s Great about Northern Ireland’s pubs – from great food and drinks to great entertainment and great craic. Quizzes are one of the things our pubs do best, so we’re delighted to join forces with Downtown Radio to host this ambitious World Record attempt, in aid of Cash for Kids.

“We’re offering a real opportunity for people right across Northern Ireland to come together and make a little piece of history – we hope the public will come out in force to join us as we go for this exciting World Record attempt.”

People wanting to take part in the Great Ulster Pub Week World Record Attempt Quiz should sign up at a participating pub of their choice. Entrance costs £18 per team, with a maximum of six people per team – all entrance fees will be donated to Cash For Kids to support the charity’s great work across Northern Ireland.

In addition to being crowned the overall victor live on air, the winning team will receive a VIP trip to The Guinness Storehouse in Dublin. Other prizes will be awarded to runners-up in each of the participating pubs.

“As the only local commercial radio station to cover all of Northern Ireland, we’re hoping that our listeners will get involved all over the country to support this effort, and, in doing so, help raise funds for our charity, Cash For Kids.”

“We are delighted to be involved in a world record breaking attempt and can’t wait to hear how it comes across live on air. Downtown remains the only commercial radio station to cover the entire province, so if we are successful this will be truly a Northern Ireland wide effort.”

Darren Fowler, regional charity manager, Cash for Kids Northern Ireland said: “Cash for Kids is always up for a challenge, and we are all about putting the ‘FUN’ in fundraising, so a World record Pub Quiz attempt is right up our street. We’re delighted to join forces with Pubs of Ulster to host this exciting event as part of The Great Ulster Pub Week.

“Cash for Kids works all year round raising funds for children in communities throughout Northern Ireland who rely on charitable support to overcome disadvantage. It’s our mission to eliminate disadvantage for all children and young people who live in Northern Ireland and coming up with amazing and Fun events like this one is how we are making sure that happens.”

People wanting to enter a team to be part of The Great Ulster Pub Week, should contact the official venue of their choice.

*This list is correct at the time of issue; check www.downtown.co.uk/pubquiz for a map of participating pubs, which will be updated as further venues come on board.

The Great Ulster Pub Week (1-9 May 2014) will be the biggest pub centric multi-venue event seen in Northern Ireland and will showcase all that’s ‘Great’ about the Ulster pub. Over 160 pubs from right across Northern Ireland are signed up to be part of the exciting pub celebration, with hundreds of unique events showcasing great food, great entertainment and great craic set to take place.

For further information and for full event listings, visit www.greatulsterpubweek.com or find The Great Ulster Pub Week on Facebook, Twitter, You Tube and Instagram using the hashtag, #UlsterPubWeek