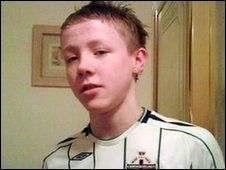 THE inquest into the death of a schoolboy who drowned in a river while trying to get away from chasing police just over four years ago is due to be heard today.

Kyle Bonnes, of Stevensons Park in Tullyally, jumped into the River Faughan near Drumahoe at around 5.00pm on 4 April, 2010 as he attempted to get away from police who had responded to reports of a disturbance at nearby Glenshane Road.

Rescuers who pulled the 15-year-old from the fast-flowing river were unable to revive him.

The Lisneal College pupil had been on bail after appearing in court earlier in the day on charges related to attacks on cars in the Fountain area of the city three weeks previous.

The inquest into his death is due to get underway in Magherafelt today and is expected to last four days.in