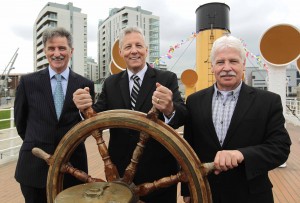 FIRST Minister Peter Robinson visited the SS Nomadic today on the anniversary of the historic ship’s first sailing from Belfast in 1911.

Chairman of the Nomadic Charitable Trust Denis Rooney hosted the visit of the First Minister who officially opened the ship’s new onboard café and shop facilities.

This is the first opportunity for the First Minister to visit the SS Nomadic since she was opened to the public in June of last year.

Over the last seven years the SS Nomadic has undergone a substantial £7m restoration programme which has seen the vessel which transported first and second class passengers to the ill fated liner restored to her former glory and is now in permanent residence at Hamilton Dock in the heart of Belfast’s Titanic Quarter.

Denis Rooney, Chairman of the Nomadic Charitable Trust said: “We are delighted to welcome the First Minister onboard today and give him one of our very popular Guided Tours.

“The addition of the Cafe on board and the relocation of the shop to the Third Class Section will further enhance the Visitor experience.

“We are delighted that the vessel has proved to be such a success with visitors and has now firmly established itself at the core of Belfast’s rich maritime history story.”

Just six months on from its official opening to the public, the SS Nomadic, tender vessel to the Titanic and the last remaining White Star Line ship in the world was voted number one for ‘things to do in Belfast’ on the influential online review travel website Trip Advisor.

The SS Nomadic is also quickly establishing itself as a popular events venue with over 100 events being successfully hosted on the vessel already including a range of corporate events, birthday and wedding celebrations and next week the restored vessel will host its first wedding.