BESPOKE HAIRDRESSING IS QUIFF OFF THE MARK 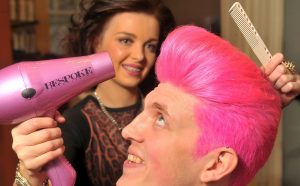 WITH a name like Bespoke Hairdressing, it is no surprise that the appropriately-named hair salon has created a unique new hairstyle to celebrate the arrival of the world famous international Giro d’Italia cycling race in Northern Ireland.

As the excitement builds for the second largest bike race in the world to get underway in Belfast on May 9, Bespoke Hairdressing today unveiled ‘The Giro’ a stunning creation which is sure to have customers racing their way to the company’s salons on Belfast’s Belmont Road and University Road.

The creation offers a shocking pink quiff which is perfect for anyone wanting to stand out from the crowd at the event which is expected to attract more than 140,000 visitors to Northern Ireland next month.

Its aerodynamic design might even work for competitors battling for the Giro d’Italia’s famous pink winner’s jersey, as Bespoke owner and spokes-man Stewart Lilley explained.

“The atmosphere around Belfast is really building ahead of the Giro d’Italia and we are delighted that both our salons are going to be at the heart of the action,” said Stewart.

“Our clients on University Road will actually catch a glimpse of the world’s best cyclists as they race past during the Team Time Trials on the Friday, whilst our Belmont Road salon is only a short walk from the action in East Belfast.

“It is fantastic to see such a high profile sporting event staged on our doorstep and as Northern Ireland turns pink to celebrate its arrival, we thought we would join the fun by creating our very own Giro look,” he added.

“Our philosophy at Bespoke Hairdressing is ‘customised creativity’ and we feel that our new ‘Giro’ style is a perfect example of that.

“If any competitors in the big race fancy calling into either of our salons, we’ll be more than happy to help them stand out from the rest of the field with their very own Giro look. It’s bold, it’s daring and very fitting!,” he concluded.

Bespoke Hairdressing is Northern Ireland’s biggest Aveda hair salon and the only Aveda salon on the island of Ireland with two retail outlets.

Established in 1998, the company has expanded steadily over the years and now employs a team of almost 20 staff who offer comprehensive consultations and up to the minute techniques to ensure their clients receive a look that caters to them and their lifestyle.