NEW APPROACH NEEDED TO DEAL WITH THE PAST, SAY SECRETARY OF STATE 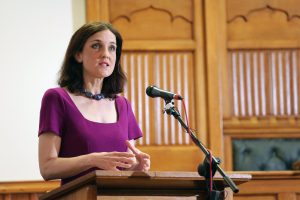 SECRETARY of State Theresa Villiers said today that any new process to examine NI’s past must have a more “proportionate focus on the wrongdoing of paramilitaries” and less on the activities of the state.

She said a fresh approach was “vital”, as the past was placing a major burden on the policing and justice system.

Ms Villiers also called for agreement on parading and flags.

“At least with a new process, agreed by Northern Ireland’s political leaders, there is scope to write in, from the start, the need for an objective balance and with proper weight and a proportionate focus on the wrongdoing of paramilitaries… rather than the almost exclusive concentration on the activities of the state which characterises so many of the processes currently under way,” she said.

Ms Villiers also said any new process which examined the past must be “balanced, transparent and accountable”.

“There are, of course, some who believe that the best way to deal with the past is to forget it,” she said.

“I understand that sentiment… but as the On the Run controversy has demonstrated, I don’t believe that’s a viable option.”

Ms Villiers also believes there is an urgent need to find a way to deal with the past that garners cross-community support.

“The need for a fresh approach on the past is becoming ever more vital because of the increasing pressure the status quo is placing on Northern Ireland’s institutions… with inquests, cases in Strasbourg, freedom of information requests and Troubles-related investigations by the police and police ombudsman,” she said.

She said a lack of consensus on the past was having a huge knock-on effect, both politically and economically. 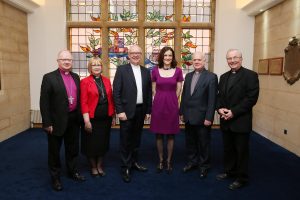 “All this is placing a major burden on the policing and justice system with a recent Criminal Justice Inspection report estimating that the Northern Ireland Executive now spends over £30m a year on legacy issues,” she said.

In a wide-ranging address, Ms Villiers also said an agreement on flags, parading and the past would send a powerful global message about the ability of local politicians to find solutions.

“I also believe that agreement on the Haass agenda could free up the space for politicians to focus more on other issues that are critical to our future… such as rebalancing the economy, reforming the public sector and building a genuinely shared future,” she said.

Ms Villiers also criticised Sinn Féin and the SDLP over their stance regarding the National Crime Agency.

The agency does not operate in Northern Ireland in the same way as the rest of the UK after the two parties blocked a move to give it powers to carry out search operations and recruit informers.

Ms Villiers said it was “deeply regrettable that, despite months of talks and a real willingness by (Stormont justice minister) David Ford and the Home Office to be flexible, some parties remain opposed to the assembly legislation.

“That means Northern Ireland’s ability to fight some of the most despicable crimes is weakened.”

The secretary of state also warned that unless there is local agreement on welfare reform, the executive would face a bill that will be costly.


One Response to NEW APPROACH NEEDED TO DEAL WITH THE PAST, SAY SECRETARY OF STATE