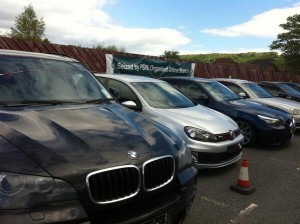 DETECTIVES have recovered 16 cars following the planned search of premises into a stolen vehicle racket.

During the search on Monday afternoon, 14 April, a number of cars, of makes including BMWs, Volkswagen, Citroen, Mercedes, Chrysler and Saab, were seized at Crossan Road in Newry.

A number of these vehicles are believed to be stolen and two BMWs have been confirmed as stolen in the Republic of Ireland.

A lorry, tools, engine parts and documents have also been seized by police.

Inquiries are now underway to identify the owners of the vehicles.

A 29 year old male has been arrested and is currently assisting police with their enquiries.

Detective Inspector Will Tate, of Ardmore CID, said: “We will now begin the task of identifying and locating owners of the vehicles seized to ascertain if they were in these premises lawfully or unlawfully.

“We have already been able to confirm that two BMWs were stolen in the Republic of Ireland.

“I would appeal to anyone in the community with information to contact us at Ardmore Police Station on the 101 non-emergency number.”

If you prefer to provide information without giving your details you can contact the independent crimestoppers charity anonymously on 0800 555 111.


One Response to POLICE SEIZE16 CARS IN STOLEN VEHICLE PROBE