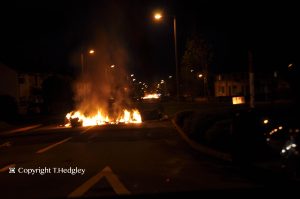 Rioting and hijacking broke out aftr police allegedly found a rifle at the home of the top UDA man in Castlemara yesterday afternoon.

A van and number of vehicles were set alight in the Woodburn Ave area of the town close to Sunnylands Nursery School .

Police deployed the PSNI’s ‘India 99’  helicopter to fly over the Northlands area as gangs of youths roamed the streets.

Motorists had been advised to avoid the area.

The police searches are part of an ongoing investigation in a UDA mob attack on homes in Larne last month.

A 100-strong mob, many of whom were masked, attacked several homes in the town on Sunday March 30.

The gangs had gathered earlier in the evening before heading to Larne.

ACC George Hamilton blamed the south east Antrim brigade of the UDA for carrying out the attacks, saying it was on a “power trip”.