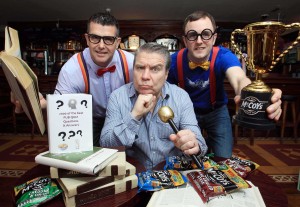 DID you know that a strawberry is not an actual berry but a banana is? Or that legendary Mickey Mouse creator Walt Disney was afraid of mice?

If you did, then you and your friends could be in with a chance of winning a tasty £1000 thanks to the return of the annual McCoy’s NI Pub Quiz in association with radio station U105FM.

The search for the brainiest pub quiz team in Northern Ireland takes place in May covering 14 towns and cities throughout the province including Belfast, Downpatrick, Armagh, Enniskillen, Omagh, Derry~Londonderry, Carrickfergus, Newry, Ballymena, Lurgan, Portstewart and Hillsborough – with the winning team from each heat qualifying for the grand final at The Errigle Inn in Belfast.

“We are surrounded by friends and colleagues who think they know the answer to life’s difficult questions,” said Ricky Watts, Business Development Manager (NI) for McCoy’s manufacturer KP Snacks. “That is why the McCoy’s NI Pub Quiz is the perfect opportunity to put them to the test and battle it out for the £1000 prize and, more importantly, the prestigious accolade of being Northern Ireland’s brainiest pub quiz team.

“This year, the McCoy’ NI Pub Quiz has an added dimension in the form of our Rio Local campaign which is giving everyone who buys a packet of McCoy’s crisps the chance to bag a seat at the McCoy’s Rio Local pub in Brazil this summer. The pub itself is a replica of the Old Star in Cheshire which won a UK-wide on-trade competition to be recreated in Rio in June,” he added.

U105’s popular drive-time presenter Johnny Hero will be the guest quizmaster at the grand finale and he expressed his excitement at officiating this year’s event, which will be held in the Arbele Lounge at The Errigle Inn on Thursday June 5.

“I’ve been involved with the McCoy’s NI Pub Quiz in the past and always look forward to it,” said Johnny. “We are a competitive bunch in Northern Ireland and enjoy a good quiz and this is certainly Northern Ireland’s definitive pub quiz.

“The standard at these events is incredibly high and the weird and wonderful facts that the top teams have at their disposal never ceases to amaze me. So whether you believe it’s the taking part that counts or your eyes are firmly on the grand prize, the McCoy’s NI Pub Quiz will certainly get the adrenaline pumping and guarantee a great night out with friends,” he concluded.

Previous winners of the McCoy’s NI Pub Quiz include two-time champions The Hoffs from Belfast who went on to appear on BBC TV quiz show Eggheads, We’re Only Here For The Crisps from Bangor and The Sandbaggers from Portstewart.

Hopefuls wanting to test their knowledge against the best in this year’s competition should simply turn up to their nearest regional heat (details below). Teams must have no more than six members and must be available to participate in the final in Belfast on June 5. Demand at each heat is expected to be high so participants are advised to arrive early on the night to avoid disappointment.

To get everyone’s brains working and ready for the heats, quiz buffs are encouraged to like McCoy’s NI Pub Quiz on Facebook for a variety of killer questions, fun facts and heat updates along with weekly prize giveaways.

The McCoy’s NI Pub Quiz 2014 heats are taking place at the following venues:

Hillsborough – The Plough, May 1

Ballymena – The Front Page Bar, May 7

Portstewart – The Anchor, May 7

Enniskillen – The Devenish, May 15

Carrickfergus – The Windrose, May 27

The grand final will be held on Thursday June 5 at The Errigle Inn in Belfast.