SHARE YOUR CHILDHOOD MEMORIES WITH NITB, IT’S AS EASY AS RIDING A BIKE! 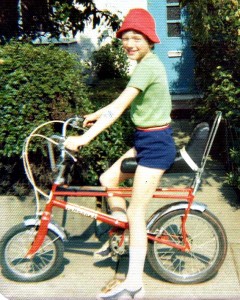 AS part of the build up to the Giro d’Italia, The Northern Ireland Tourist Board (NITB) is encouraging everyone to indulge in some old fashioned nostalgia and delve into their memory boxes for a special childhood moment – when you first learned to ride a bike.

World famous bike race, the Giro d’Italia, is just around the corner, and as Northern Ireland prepares to go bike crazy, NITB is asking people to share their bicycle themed childhood family snaps on twitter and Instagram using the hashtag #cyclingmemories.

“As a child, learning to ride a bike is a landmark moment for most of us and a memory that stays with us all of our adult lives,” said Ruth Burns, Destination PR Unit Manager at NITB.

“To celebrate the arrival of the world’s second largest bike race we would like to hear about the fond memories people have of learning to ride, who taught them, when the stabilisers came off, people’s first wheelie or hands-free ride, what their first bike was and where in Northern Ireland they took their first lessons.

Irish cycling legend, Stephen Roche, former winner of the Giro d’Italia and Tour de France, said: “I loved the freedom riding a bike gave me as a young man to get out and about with my mates and I made the most of it by taking long rides around Dublin and into the mountains.

“I had no idea that my boyhood love of cycling would take me on the wonderful journey I have been on as an adult. I would encourage everyone to get a bike and get out into the great outdoors – Northern Ireland has excellent bike tracks and stunning countryside and there is no better way to enjoy it than on a bike.”

Well known NI personalities are helping to kick-start the fun initiative by sharing their own photos and memories with NITB.

U105’s Maurice Jay, explains why learning to ride a bike is such an important memory for him. 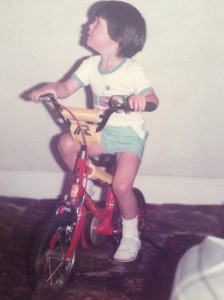 “I doubt very much I have been on a bike since I was a kid,” he explains “but I clearly remember my Tomahawk bike and the follow up Grifter bike. Back in the day, before games consoles of any description, kids did things like “play outside”, and your bike was very much central to that. Two bike related achievements stick in my mind, riding down the Church Road hill from Craigantlet into Holywood at around 60mph, and building Evil Knievel ramps with old door, I believe the estate record was 24 tyres laid in a row!”

Cool FM DJ Pete Snodden, said: “This was my first bike. I was four years old and had no choice in what I wore so forgive me for the dodgy sandals. It was a Raleigh and it had stabilisers but it didn’t take me long to get those bad boys off and get pedalling on my own. My first bike brings back loads of memories including my Dad taking me to the new BMX track in Bangor on its opening day and me being unable to pedal my way over the first hump.”

Broadcaster Pamela Ballantine said: “This is me aged about 3 years, I think, on what was my pride and joy at that age, my tricycle. The shot was taken in our back garden in Maryville Park, Belfast and you can just about make out the bread bin storage bit on the back of the tricycle. Apparently this is where I used to hide my sweeties – I was such a giving little girl!”

“I still love cycling today and am thrilled that the Giro d’Italia is coming to Northern Ireland. The world’s best riders will get to see, in my opinion, some of the world’s most stunning scenery during the competition as they make their way through Northern Ireland. Good luck to them all.” 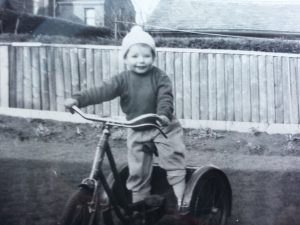 LOOK AT HER: UTV presenter Pamela Ballentine as you have never seen her before!!!

To share a photo of a childhood cycling moment people can post their photos on twitter and Instagram using the hashtag #cyclingmemories, along with their name and special childhood memory of riding a bike or email them to digital@nitb.com.


One Response to SHARE YOUR CHILDHOOD MEMORIES WITH NITB, IT’S AS EASY AS RIDING A BIKE!