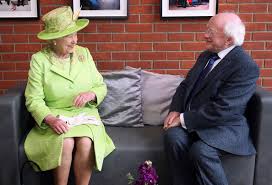 MARTIN McGuinness will attend a banquet hosted by the Queen during next week’s first state visit to Britain by the Republic’s President Michael D Higgins.

Sinn Féin president Gerry Adams said the decision by the deputy First Minister had to be viewed against the backdrop of huge political change in recent years.

President Higgins will be joined by Taoiseach Enda Kenny during the visit which starts on Tuesday, April 8.

McGuinness shook hands with the Queen during her visit to Northern Ireland in 2012.

The state banquet is to be staged at Windsor Castle, in honour of President Higgins.

During his UK visit, he will address both Houses of Parliament.

Mr Higgins will also visit the Royal Shakespeare Company in Stratford-upon-Avon and attend another major dinner at the Guildhall in the City of London, given by the Lord Mayor.

During the visit, the Queen will host a reception for leading figures from Northern Ireland’s cultural, political and business life.

“Symbolically, it’s of enormous importance, but also practically, in that it brings the relationship between the two countries and the two peoples to an unprecedented level.

“This was unthinkable 20 years ago,” he told the BBC’s Andrew Marr Show.

He added: “Martin McGuinness, as deputy first minister in the assembly in Northern Ireland has been very forthright and very pragmatic in what he has been doing here.

“I don’t see why he shouldn’t attend, of course. This is all part of the building of relationships between the two countries and peoples on both sides of the divide.

“We’ve got to move on and not be blocked by the past,” the Irish prime minister added.