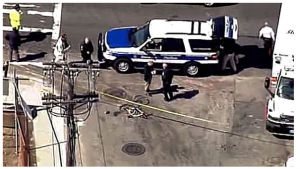 The scene of the accident in Boston, USA which claimed the life of NI man Owen McGrory

POLICE in Boston have named the man killed in a hit-and-run incident involving a bin lorry in the city as Owen McGrory.

Owen (30), had been living in the Chelsea area of the US city and is originally from the Shantallow area of Derry.

He died after the bike he was riding was struck by the lorry at the corner of Cambridge and Spice Streets in the Charlestown area of Boston on Thursday afternoon last (local time).

He was pronounced dead at the scene.

A 41-year old man has appeared in court charged in connection with the incident.

Ricky Prezioso, a father of three, is charged with leaving the scene of an accident causing death.

Prezisoso, who denies the charge, was released on $5,000 bail and is due back in court again 19 May next.