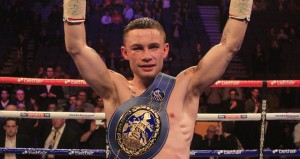 CARL Frampton is eyeing up a world title fight after knocking out Hugo Cazares in two rounds at the Odyssey arena in Belfast on Friday night.

A thunderous left hook from the north Belfast punching machine put his Mexican opponent on the seat of his pants.

The 36-year-old failed get missed the count and Frampton was declared the winner by knockout – his 13th in 19 fights..

Frampton, 27, from Tiger’s Bay, will now be in line for a prized bout against WBC champion Leo Santa Cruz.

“We are going to make an outstanding proposal to Santa Cruz financially and hopefully he will come over to Belfast,” said Frampton’s manager Barry McGuigan.

“The sooner we can get it on the better.

“He has got morals and I believe he genuinely wants to fight Carl. It is all about sitting down and hammering out the deal.”

A delighted Frampton said: “That was a big shot that hurt him and it shows the power I have.

“I just threw it and it landed and that was game over.

“The support has been fantastic. I have the loudest bunch of supporters in Europe without doubt.”

Now he has set his sights on Santa Cruz.

“He wants to be in blockbuster fights and me against him would be huge.

“It is the most exciting fight out there right now and I think he will want it even more now.”

Around 10,000 people packed into the Odyssey Arena for the eliminator – and Frampton didn’t disappoint his army of fans.