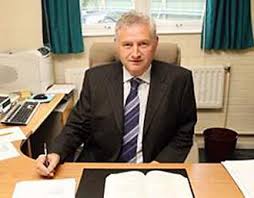 THE saga over the thorny on-the-run issue took a new twist today when a former top cop revealed Downing Street asked the PSNI to release two republican terror suspects held over a murder bid on a former soldier.

MPs at Westminster heard today that call to No 10 was made in 2007 at the request of Sinn Fein President Gerry Adams.

Retired PSNI Detective Chief Superintendent Norman Baxter said the attempt to free suspects from custody was an “illegal and unconstitutional” attempt to pervert the course of justice.

And he took a swipe at Chief Constable Matt Baggot and Secretary of State Theresa Villiers for being so quick to allow the PSNI to be criticised.

Mr Baxter, who headed up the Omagh bomb investigation, told the Northern Ireland Affairs Committee which is probing the OTR case said he refused the request.

One of the men arrested, Gerry McGeough, was subsequently convicted of attempted murder.

Mr Baxter first claimed the NIO applied pressure on the PSNI to create the circumstances where on-the-run suspects, who in some instances were “high profile members of Sinn Fein”, could return to the UK.

He then claimed pressure had also been exerted from Downing Street in regard to the 2007 arrests of Gerry McGeough and Vincent McAnespie in relation to the attempted murder of UlDR soldier Sammy Brush near Aughnacloy, Co Tyrone in 1981.

“They were arrested, I have a note here, on the 8th of March some time around tea time and taken to the serious crime suite at Antrim,” he said.

“At 9.10 pm I received a phone call from the duty ACC (Assistant Chief Constable) at (PSNI) headquarters.

“That of course in my mind is attempting to pervert the course of justice and that was conveyed back to headquarters.”

He added: “I don’t know who the personality in Downing Street was but as a police officer that is totally illegal and unconstitutional.

“We continued interviewing them and Mr McGeough was subsequently convicted for attempted murder.”

Mr McAnespie was acquitted at trial of charges related to the gun attack on Mr Brush.

The part-time UDR soldier and postman was shot as he made a delivery in June 1981. His bullet proof jacket saved his life.

Mr Baxter was asked to appear before the committee to explain his role in the contentious on-the-run administrative scheme which saw letters sent to around 190 republicans informing them they were not being sought by the authorities in the UK.

Details of the scheme, which was agreed by Sinn Fein and the Government in the early 2000s, emerged after the collapse of a case against a man accused of the IRA’s Hyde Park bomb in 1982 – an attack that killed four soldiers.

Under the process, names of individuals who feared they were wanted fugitives were passed to the Government, the majority through Sinn Fein, asking for an assessment of their status.

As part of the scheme, the PSNI was asked to examine what, if any evidence, it had against the individuals and outline the findings to the NIO.

Mr Baxter and former PSNI assistant chief constable Peter Sheridan today both told MPs they were unaware that the information they provided to the Government would end up being sent to the individuals.

The prosecution of John Downey, 62, from Co Donegal, over the Hyde Park outrage was halted in February after a judge found he had been wrongly sent one of the so-called letters of comfort, when in fact the Metropolitan Police were looking for him.

The letter was sent by the NIO but was based on an assessment made by Mr Baxter that Downey was not wanted by police.

The PSNI was heavily criticised in the wake of the case for failing to mention that Mr Downey was wanted by the Met.

Mr Justice Sweeney said sending the letter to Mr Downey had been a “catastrophic” mistake.

Mr Baxter today insisted his statement referred only to the situation in Northern Ireland and the final letter included additions made by the NIO.

He refuted any suggestion that an error had been made by him or the PSNI and criticised the service’s current chief constable Matt Baggott for apologising over the episode.

He said it would have been illegal for him to inform a suspect if he was wanted by another police force.

“I am sure you have read in the judgment questions as to why I did not refer to Mr Downey being wanted for the Hyde Park bombing,” he said, claiming that prosecutors made no attempt to gain the PSNI’s view while the case was ongoing.

Mr Baxter further claimed that at a meeting in 2006 officials for the attorney general for England and Wales, who then had responsibility for Northern Ireland as well, made clear they would assume responsibility for checking if forces on mainland UK were seeking any of the fugitives listed by Sinn Fein.

The long serving officer said Mr Baggott should have made some inquiries before adopting a “culture of apology”.

“Mr Baggott reacted without knowledge, I think it was poor leadership in that area to go on to cover for the NIO,” he said.

Mr Baxter said he feared that people would try to hang him out to dry.

“At the end of the day the victims and people in Northern Ireland need to know that there is a robust prosecution process and that they can have confidence in justice and this has totally undermined it,” he said.

“The victims of Northern Ireland will never get justice. Once the Sentencing Act (linked to the Good Friday peace agreement) was passed which allowed prisoners to be released and all these other schemes, justice in relation to republican and loyalist terrorists has been totally corrupted.

“The victims, the casualties, the collateral damage of a policy decided in 1998, it is almost as if the victims are crying out for justice and there is no one to listen to them and this process is just more evidence of it.”

Mr Baxter claimed there was “a culture within the NIO to ensure that republicans were not prosecuted”.

“I thought the Secretary of State’s statement was quite disgraceful in blaming the police without any due process,” he said.

“She, by doing so, was covering up for what was going on with this administrative process.”