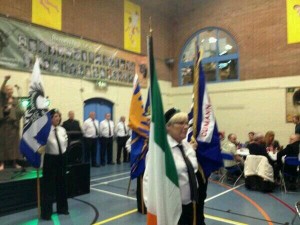 THERE has been cross-party calls for an investigation in an IRA event held a Belfast leisure centre.

The SDLP, the DUP and TUV have called for an urgent investigation into the ‘Remember Our Volunteers’ stunt.

SDLP Councillor Tim Attwood has called on officers in Belfast City Council to conduct an a probe in the event at Whiterock Leisure Centre on Saturday 29 March 2014.

The poster for the event featured armed men and photographs from the evening showed a colour party.

Cllr Tim Attwood said: “I am deeply concerned that a Belfast City Council Leisure centre may have been used for a political event on Saturday evening.

“It is essential that all Council facilities are open to all sections of our community, a political event is not appropriate and will only discourage people from using our leisure centres.”

“I have asked our officers to urgently investigate this matter and ensure that all Belfast City Council facilities are open to all.”

TUV leader Jim Allister says he tried to raise the matter in the Assembly chamber under oral questions but was shot down by Speaker Willie Hay.

DUP councillor leader councillor Lee Reynolds said: “This event is utterly unacceptable and how it ended up taking place in a Council facility is a matter of deep concern.

“The decorations for the event had terrorist imagery including some especially painted for the event, flags of proscribed organisations and replica weapons.

“The information at present is that the Centre had been booked under the name of a different organisation for what was described was a sporting and cultural awards event.

“Members of City Council staff have been murdered by paramilitary organisations and it is an insult to their memory that an event glorifying terrorists took place in a Council building.

“This is the second time an issue like this has come up in a Council facility in recent weeks so a review of our systems will be necessary and lessons need to be learned.”