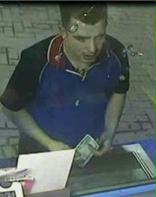 DETECTIVES have made a fresh appeal for information to track down the killers of a pizza delivery driver in west Belfast.

It is one year since Kieran McManus was shot dead outside Domino’s Pizza on Kennedy Way by a lone gunman.

Police are seeking information about the movements of a maroon Vauxhall Astra found burned out a short time later.

The senior investigating officer in the case said it was a “ruthless and reckless attack, given the number of people in the area at the time”.

Detective Chief Inspector Justyn Galloway said they had released CCTV footage that showed Mr McManus in his uniform at a filling station shortly before returning to the fast food outlet where he was murdered.

“I would ask everyone in this community to look at these images and think about the fact that a short time later, Kieran was dead,” he said.

“I would ask them to think about Kieran and his family, and the needless pain they have suffered over the past year.

“Those responsible for this ruthless murder will only be brought before the courts if people with information work with police.

“In the past year we have interviewed 107 civilian witnesses, conducted nine searches and made one arrest. We are ready and willing to progress this challenging investigation but we need people to work with us.”

The father-of-one was originally from the Turf Lodge area of west Belfast.

The killing may have been the result of an ongoing feud between McManus and members of dissident republican groups Oglaigh na hEireann (ONH) and the Continuity IRA (CIRA).