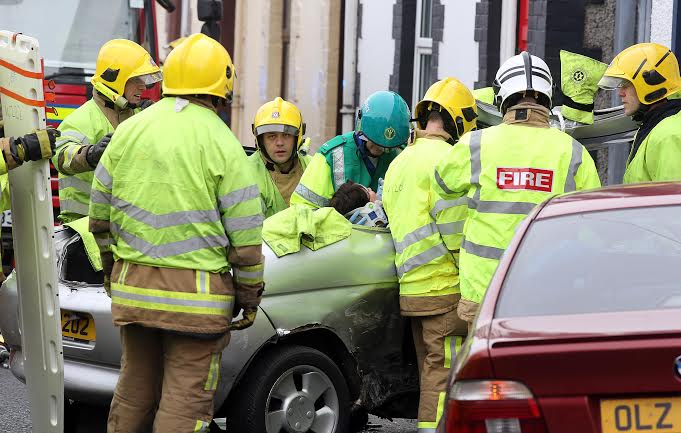 THIS is the moment an injured woman was cut was rescued after her car was hit by a stolen car.

The victim was in a silver Ford Puma which was in collision with a red BMW on Creggan Hill close to its junction with Helen Street in Derry at around 4.45pm.

The woman, who had to be cut free by firefighters, was taken by ambulance to Altnagelvin Hospital where she is being treated for back, neck, chest and leg injuries which are not thought to be life-threatening.crash 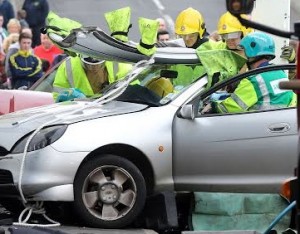 Emergency Services at the scene of the road accident on Derry’s Creggan Hill.Photo Lorcan Doherty Photography

Both vehicles ended up against houses on the street. It is understood no one else was injured in the incident.

The driver of the BMW, who eyewitnesses said had fled the scene, was arrested a short time later and is being questioned on suspicion of a number of motoring offences as well as assault on police.

A PSNI spokesperson said police were called to the scene following reports from members of the public that a pedestrian had been knocked down on Creggan Road.

The spokesperson added: “A BMW car allegedly involved in the incident then struck a Ford Puma car.

“The driver of the BMW made off from the scene but was caught and arrested by police.”

Creggan Hill has been sealed off as PSNI accident investigators carry out a detailed examination of the crash scene.

Traffic diversions are in place and motorists are being advised to avoid the area.