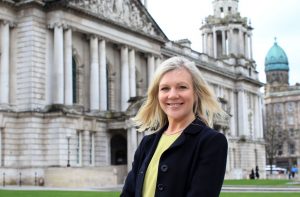 BELFAST City Council’s Director of Health and Environmental Services Suzanne Wylie has been appointed as the Chief Executive of the new Belfast council.

The Belfast Statutory Transition Committee (STC) agreed the appointment today after a process administered by the Local Government Staff Commission of Northern Ireland.

Belfast City Council has never had a female chief executive.

Alderman Gavin Robinson, chairman of the STC, said: “Suzanne fully merits this appointment after coming through a testing and strenuous recruitment process during the past few weeks.

“We believe she is the right person to take the council into a new era and elected representatives are convinced we can work with her for the good of the city.

“It is an exciting time for the city and Suzanne, who has just completed 25 years’ service with the council. She has a wide range of experience across many of the council’s responsibilities, including environmental health, emergency planning, waste management and urban development.

“The current chief executive of Belfast City Council Peter McNaney will work closely with her during the next few months to ensure a seamless transition from the existing organisation to the new. We all wish Suzanne every success in her new post.”

Ms Wylie (48) expressed her delight at the appointment and said she was invigorated by the challenge ahead.

She said: “This is a time when the elected members, the officers and the various stakeholders of Belfast all need to work together for the good of the people of the city, the council and its employees.

“I have been responsible in recent years for a leading a number of partnerships aimed at making Belfast a safer, healthier, more vibrant and sustainable city. I am passionate about my home city of Belfast and am committed to dealing with some of our long-standing issues such as health inequalities and community cohesion.

“The months ahead will be extremely challenging as we prepare for the new powers and responsibilities that Local Government Reform will bring and the new areas that will come into our jurisdiction.

“But I am confident, given the high calibre of our elected members, our staff, the stakeholders and the people of Belfast, that we can successfully work together in partnership to meet the challenge and grow the city as a great place to invest, work, live and visit in the years ahead.”

There were 25 applicants – from a wide range of backgrounds, both locally and internationally – for the Chief Executive post.


One Response to FIRST FEMALE CHIEF APPOINTED OF BELFAST COUNCIL