GLASGOW’S SCOT SO MANY BRILLIANT MOMENTS 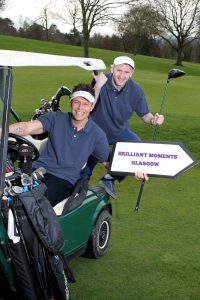 GLASGOW is a city bursting with brilliant moments just waiting to be experienced, which is why Glasgow City Marketing Bureau, VisitScotland and P&O Ferries are encouraging NI holiday makers to make the short journey across the Irish Sea to enjoy some of the city’s highlights this year.

2014 is set to be a landmark year for Glasgow as the city plays host to a range of events that are sure to inspire music lovers, fashionistas, culture vultures and sports fanatics alike.

In this Year of Homecoming Scotland, Glasgow will welcome world-renowned events such as the Glasgow International Comedy Festival, BBC Radio 1’s Big Weekend, The Commonwealth Games, Piping Live!, the World Pipe Band Championships, and the MTV Europe Music Awards. All this will be set against a backdrop of world class museums and galleries, the best shopping outside London’s west end, and the famously warm and witty Glasgow welcome.

Running from 23 July to 3 August, The Commonwealth Games will offer visitors the chance to see some of the world’s top sporting talent in action as Glasgow welcomes 4,500 athletes from 70 nations across the globe. Running alongside the sporting action, two cultural events – a Scotland-wide programme called ‘Culture 2014’ and Games-time celebration, ‘Festival 2014’ – will see Scotland burst into life and touch every part of the nation.

Piping fans should get tuned in to Piping Live! (11-17 Aug) and the World Pipe Band Championships (15 – 16 Aug) – a week long global celebration of traditional and modern piping culminating in the incredible spectacle of 8000 pipers competing to be crowned world champions.

And sports enthusiasts will be practising their swing in anticipation of the greatest team tournament in golf, the Ryder Cup, which will take place just an hour outside Glasgow at the magnificent Gleneagles Hotel in Perthshire from 23 – 28 September. The spectacular Ryder Cup opening ceremony will take place in Glasgow’s SSE Hydro

Travelling to Glasgow has never been easier than with P&O ferries who operate the shortest, fastest and most frequent crossings between Larne, Troon and Cairnryan. With prices starting from £79 to Cairnryan for a car & driver and from £99 to Troon for a car & driver it’s great value too.

Scott Taylor, Chief Executive of Glasgow City Marketing Bureau, said: “One thing is certain – 2014 is the year of Glasgow and there’s never been a better time to visit.

“The city is buzzing and we’re firmly in the global spotlight as we prepare to welcome some of the biggest names in music for BBC Radio 1’s Big Weekend and the MTV EMAs, and the world’s greatest athletes for the Commonwealth Games. We’re also home to an enviable, and ever-growing, year round programme of major events and festivals, which includes the likes of the Glasgow International Comedy Festival and the World Pipe Band Championships. With so much on offer, 2014 will be a momentous and memorable year for Glaswegians and visitors alike.”

Mike Cantlay, Chairman of VisitScotland, said: “With the Glasgow Commonwealth Games, The Ryder Cup at Gleneagles and the 700-plus events of Homecoming all taking place in 2014, this really is the year that Scotland welcomes the world.

“It is set to be an unforgettable year for Scotland, and Glasgow in particular. Not only is the city hosting the Commonwealth Games – the biggest sporting event ever held in Scotland – but it also plays an important part in the Homecoming Scotland 2014 calendar, welcoming the Glasgow International Visual Arts Festival and the MTV Europe Awards.

“With some of the world’s best golfers descending on Gleneagles for The Ryder Cup this autumn, there really couldn’t be a better time to plan a trip to Scotland.”

According to Joanna Walsh, Marketing Manager at P&O, travelling to Scotland has never been easier, she commented: “With the P&O Express returning to service on March 31st and some great deals available there has never been a better time to head to Glasgow. The fastcraft sails twice daily between Larne and Troon and with Troon just 45 minutes from Glasgow and Edinburgh not much further, you can enjoy the fastest, most direct and convenient sailing to Central Scotland while enjoying everything the ferry has to offer including an upgrade to the fabulous Club Lounge.”