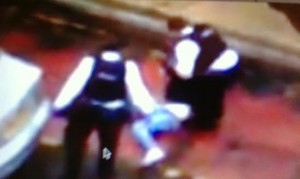 TWO police officers filmed leaving an incapacitated woman in bus lane have been moved from any duties which would bring them into direct contact with members of the public.

The “repositioning” follows a recommendation from the Police Ombudsman Dr Michael Maguire.

He has initiated an independent investigation into the incident which took place in John Street, Derry at around teatime on St Patrick’s Day.

The woman involved, Bridget Mongan (30), has called for the officers to be sacked, claiming she could have been killed after they picked her up from the middle the road and laid her in a bus lane before driving off.

Acting Deputy Chief Constable Alistair Finlay said the “repositioning” of the officers was “without any prejudice to them or the continuing investigation by the police ombudsman’s office.”

It will be reconsidered at the end of the ombudsman’s inquiry.

ACC George Hamilton, hotly tipped to be the next PSNI Chief Constable, described the incident as a “bad day for policing”.